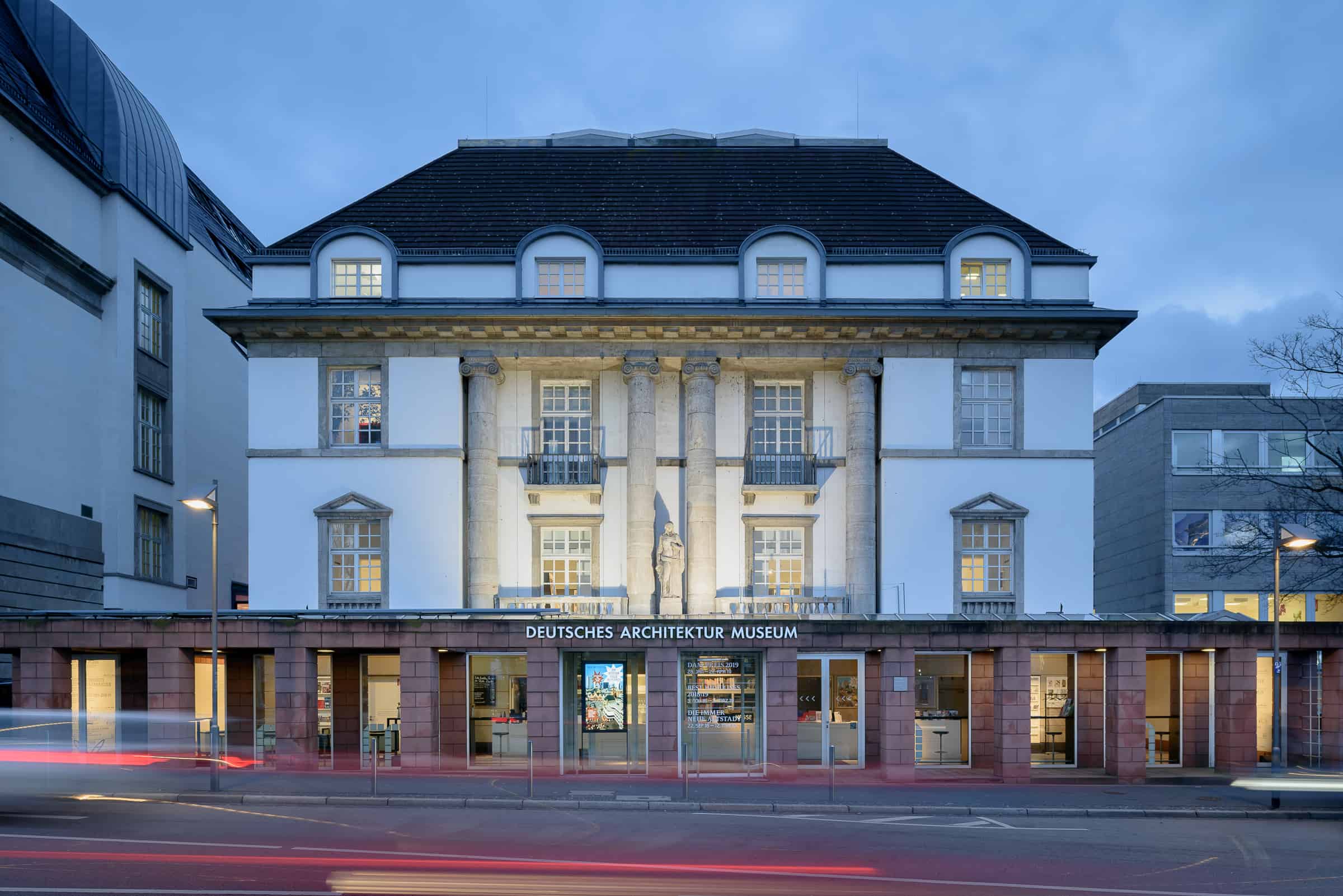 The idea of founding an architecture museum in Germany was circulating as long as 100 years ago. However, the eﬀ orts of architectural and engineering associations before World War I and Frankfurt’s Head of Urban Planning, Ernst May, at the beginning of the 1920s initially failed. It was only when plans for Frankfurt’s Museum Embankment started to take shape at the end of the 1970s under the Director of Cultural Aﬀ airs, Hilmar Hoﬀ mann, (SPD) and Lord Mayor Walter Wallmann (CDU) that the idea of a German architectural museum gained ground. Art and architecture historian Heinrich Klotz was brought on board as a consultant, and on June 1, 1984 the Deutsches Architekturmuseum, or DAM, opened with the exhibition “The Revision of the Modern”.

The ﬁrst few years were characterized by heated debates about the postmodern, which were spearheaded by founding director Heinrich Klotz. With its exhibitions and publications, the DAM developed into a globally renowned institution.

Architect Vittorio Magnago Lampugnani, who succeeded Klotz at the DAM, initiated the ideas competitions “The Berlin of tomorrow. Ideas for the Heart of a City” and “The Restructuring of Frankfurt’s Osthafen”. His major exhibitions included those about Heinrich Tessenow and Antonio Sant’Elia, as well as the landscape architect Peter Lenné, plus the city exhibitions about Hong Kong and Barcelona. The trilogy “Twentieth-century architecture in Germany” was particularly well-received. His successor, the architect Wilfried Wang, who managed the museum from 1995—2000, presented the 20th-century architecture of individual European countries in a series of exhibitions. The Mart Stam, Eileen Gray and Heinz Bienefeld exhibitions praised important ﬁgures in the modern movement. With the “Film Architecture” exhibition, Wang focused on genre-spanning themes, and he also established a series of work reports by European architects.

Professor of Architectural History Ingeborg Flagge, director from 2000—2005, succeeded in attracting a broad public to the institution. For the ﬁrst time, solo exhibitions about still living architects and construction engineers were hosted. Flagge also launched two internationally renowned architecture awards at the DAM: the “Architecture and Technology Award” and the “International Highrise Award”, which was presented for the ﬁrst time at Frankfurt’s Paulskirche in 2004.

Since 2006 the DAM has been managed by the architect and architecture critic Peter Cachola Schmal. He was working at the museum before being appointed director, having held the position of curator from 2000. In 2007 Schmal took charge, as general commissioner, of the German contribution to the Architecture Biennale in Sao Paulo. In addition, he introduced the “DAM Prize for Architecture in Germany”, as well as the “DAM Architectural Book Award”. Alongside exhibitions, that looked back at the historic greats of the modern movement, such as Martin Elsaesser and Ernst May, plus reworkings of the museum’s collection in “The Architectural Model” or “Mission: Postmodern”, international collaborations have increasingly helped to shape the range of exhibitions. In 2016, Peter Cachola Schmal, as General Commissioner, was responsible for the contribution “Making Heimat. Germany, Arrival Country” for the German Pavilion at the Venice Architecture Biennale. 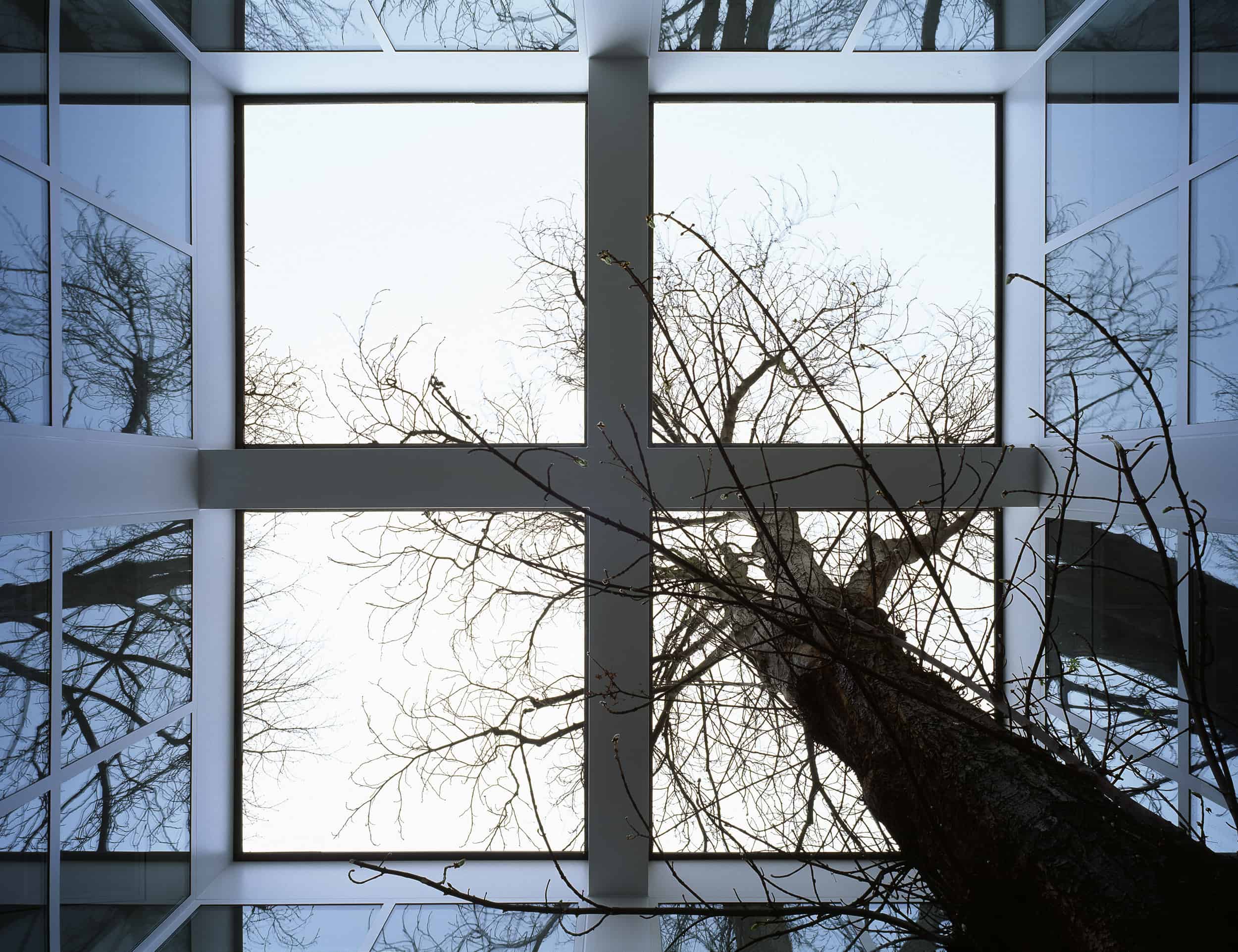 The building’s architecture – emblem of post-modernism

The transformation of a turn-of-the-20th-century mansion on the banks of the River Main into an architectural museum, undertaken in 1979—84, did not aim to simply adapt the building, which had previously been used for residential purposes, to the new functional demands, but also aspired to illustrate the theme of architecture itself. At the suggestion of DAM founding director Heinrich Klotz, the architect Oswald Mathias Ungers was commissioned with the conversion. Ungers made the implementation of his concept of a ‘building within a building’ possible by gutting the building and leaving only the outer walls intact.

The house then inserted into this outer sheath stands on a footprint of ﬁ ve by ﬁve meters, extending upwards on four pillars that demarcate the center of the basement auditorium. On the ﬂoors above the four-pillar structure gradually emerges as a genuine architecture in its own right, featuring walls with openings for windows and doors, and topped by a saddle-back roof on the third ﬂoor. The limitations of the museum premises are bordered all around with a wall made of red sandstone blocks. The house opens out to the street with a loggia.

The large exhibition hall on the ground ﬂoor, straddled by a ﬂat barrel roof, occupies part of the previous garden of the villa and encloses an inner courtyard at its center. The grid of squares is a recurring theme that is found through-out the building — in the spaces between the pillars, in the pattern of the ﬂooring, even in the design of the chairs in the auditorium. The ﬁrst ﬂoor of the museum — inside the historical mansion — features an additional exhibition space divided by supports into three aisles, thus referencing a basilica. Alongside the four pillars supporting the ‘building within a building’, the visitor’s gaze is directed upwards through the openings in the ceiling. Here, the imposing transformation from a four-pillar conﬁguration to a complete house on the two higher ﬂoors comes into view. Panoramic models, installed for the permanent exhibition conceived by Heinrich Klotz on the second ﬂoor, form a tour through architectural history. A further space for temporary exhibitions — with the complete ‘building within a building’ in its center — can be found underneath the large skylight in the top ﬂoor of the mansion. The core of the building — with the auditorium and gallery on the ground ﬂoor and the exhibition spaces on the ﬁrst, second and third ﬂoors — is enclosed by a further architectural shell. The space between this shell and the original outer walls of the mansion houses the institution’s oﬃce space, along with the two stairwells and the elevator. Every year many visitors, especially from abroad, come to Frankfurt not just to see the exhibitions, but also to familiarize themselves with the building itself. The DAM illustrates in exemplary fashion what Heinrich Klotz proclaimed to be the guiding principle in Post-Modern architecture, for it deliberately blends the design of a building with an interior that tells a story. 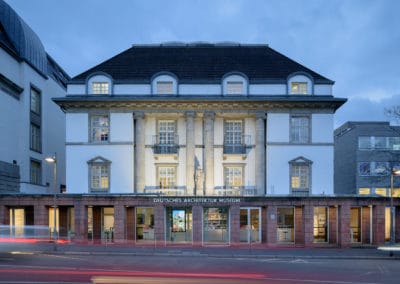 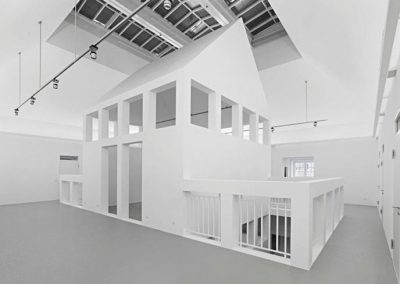 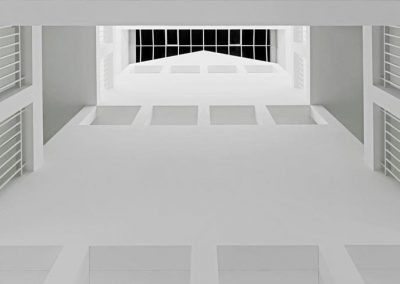 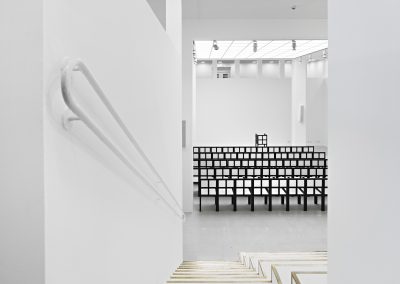 The DAM is not only one of the museums in Frankfurt, it is moreover the “German Architecture Museum”, with a national role to play. As an exhibition space and a center for discussion, the DAM is dedicated to the needs of construction culture, and with its changing exhibitions, symposiums and presentations, it fosters debate of architectural issues and problems of urban planning. In parallel, the DAM also addresses architectural themes speciﬁc to Frankfurt/Main.

Along with numerous exhibition catalogues, the DAM has been publishing the German Architectural Annual for over 20 years. This publication presents the best buildings of the year and the winners of the DAM Prize, which are also displayed in an exhibition. Furthermore, the museum is involved with the International Highrise Award, the European Union Prize for Contemporary Architecture, the European Prize for Urban Public Space and the European Architecture Photography Prize. The DAM is an increasingly internationally networked partner — collaboration with institutions abroad is consistently being intensiﬁ ed and is reﬂ ected in joint exhibitions. The museum is a member of the International Confederation of Architectural Museums (ICAM), whose 2012 conference took place in Germany for the ﬁrst time.

The DAM’s architecture collection established by Heinrich Klotz, with its drawings and models, not only oﬀers future generations an overview of architecture in Germany since the beginning of the 20th century, but is also an important resource for research and exhibitions.

Since the urban environment is not always self-explanatory, the DAM’s role as a presenter of architecture is an important one. The museum’s educational program oﬀers children, students and adults access to architectural themes in a playful and practical way. 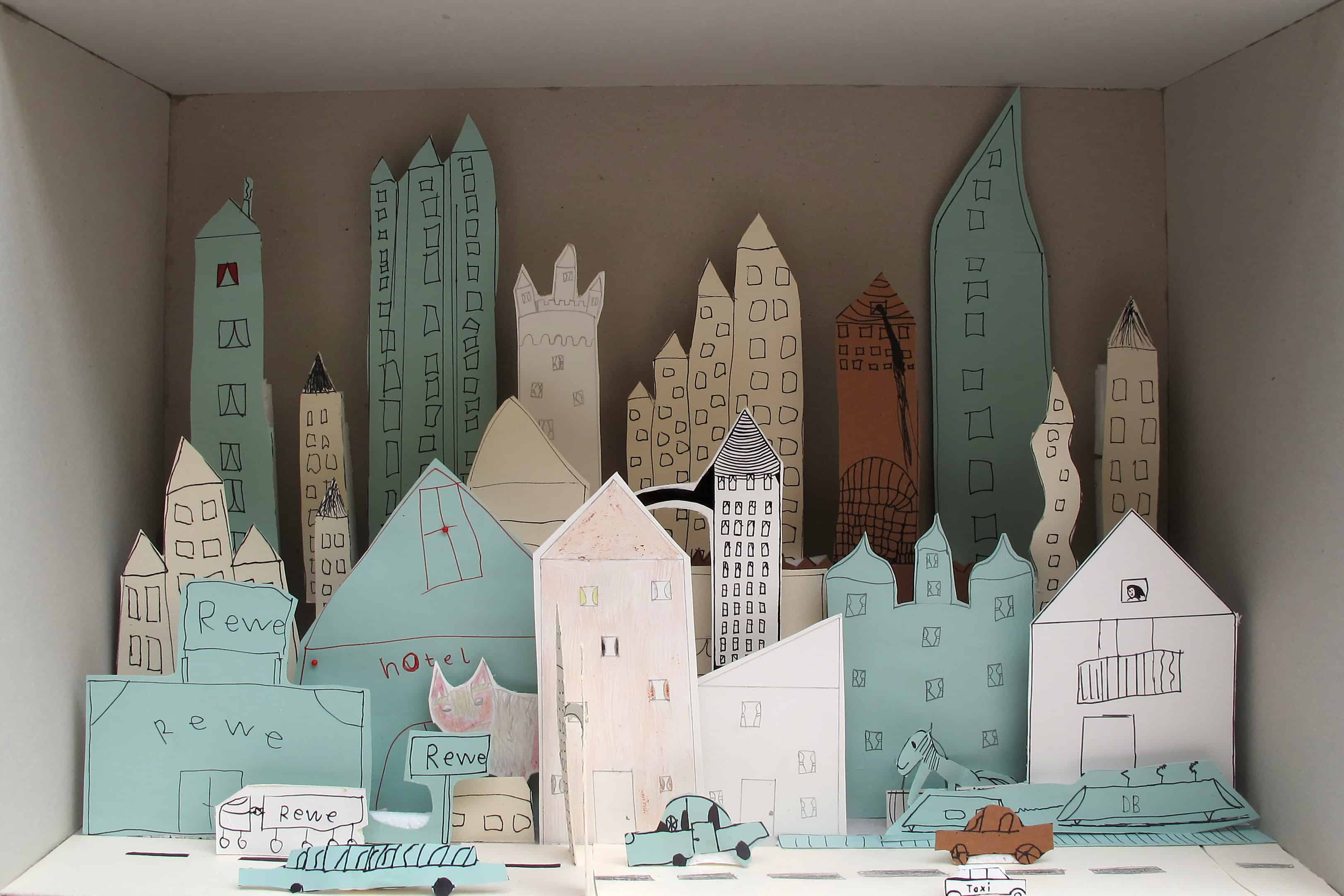 One room. One building. One city.

Since the urban environment is not always self-explanatory, the DAM’s role as a presenter of architecture is an important one. The museum’s educational program oﬀ ers children, students and adults access to architectural themes in a playful and practical way. 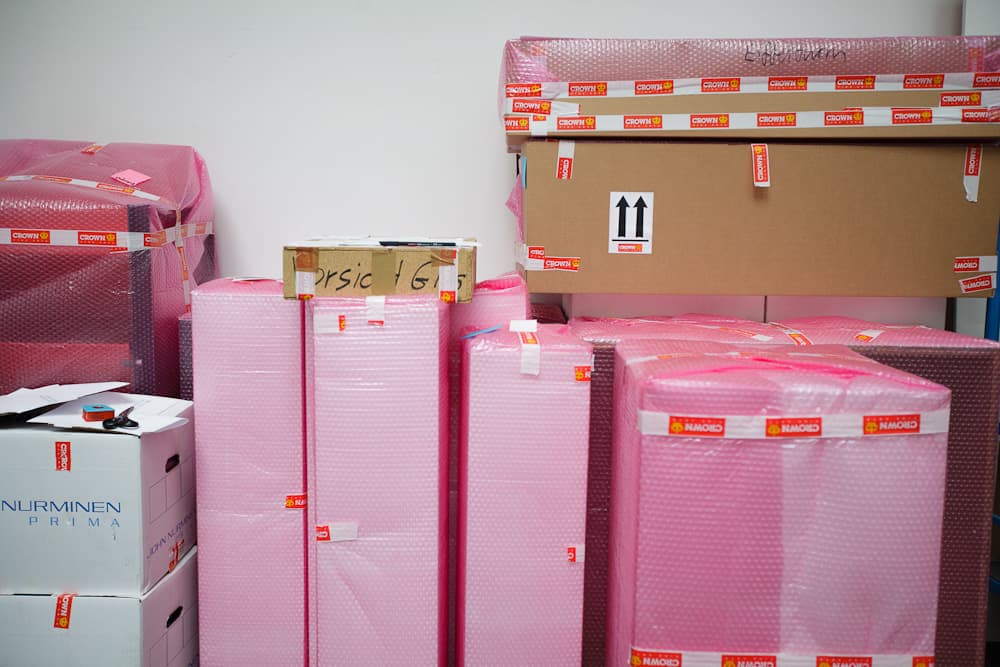 The DAM’s architecture collection established by Heinrich Klotz, with its drawings and models, not only oﬀ ers future generations an overview of architecture in Germany since the beginning of the 20th century, but is also an important resource for research and exhibitions. The DAM library also gathers more than 80,000 volumes and evaluated essays on architecture. 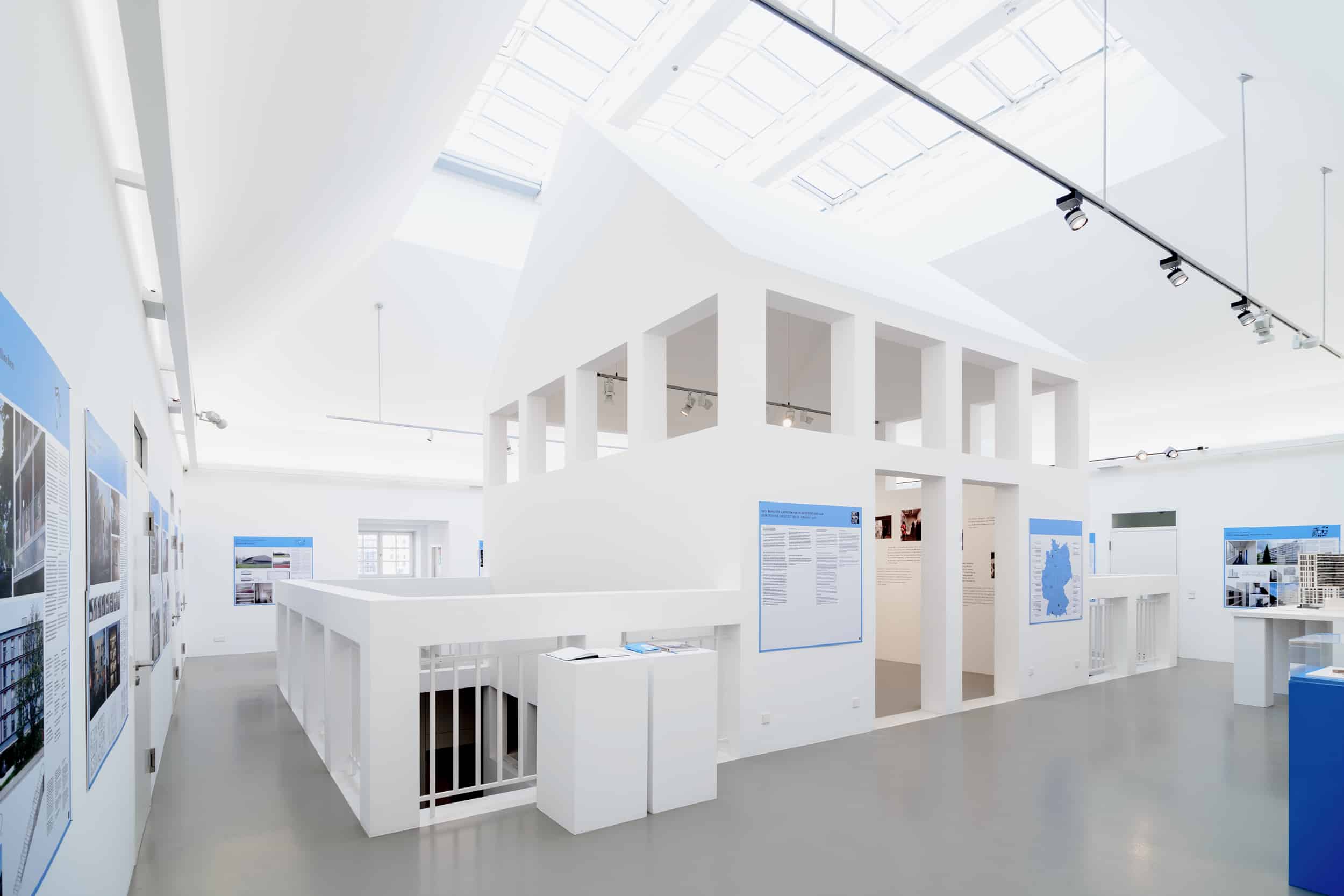 In addition to temporary exhibitions with extensive catalogs and accompanying programs, the DAM is both a promoter and partner of renowned architecture awards.